How to start contributing to Parse Server

The most amazing feature of Parse Server is that it’s accessible for developers of all skill levels.

Personally, I started playing around with Objective-C in 2012.

Parse was a way for me to build a complete online app, without having the in-depth knowledge of how to build networking, storage, user systems, etc.

The more I built with Parse, the more I learnt JavaScript, which has fortunately allowed me to contribute to Parse Server.

Although it might seem daunting, contributing to our great open-source project is encouraged to all developers, and in this blog post, I’m going to give you an insight as to how.

Ok. I like to use GitHub desktop as it’s a visual git tool and sometimes I find git to be confusing. The first step after installing is to make a copy (or “clone”) of the Parse Server repo locally. 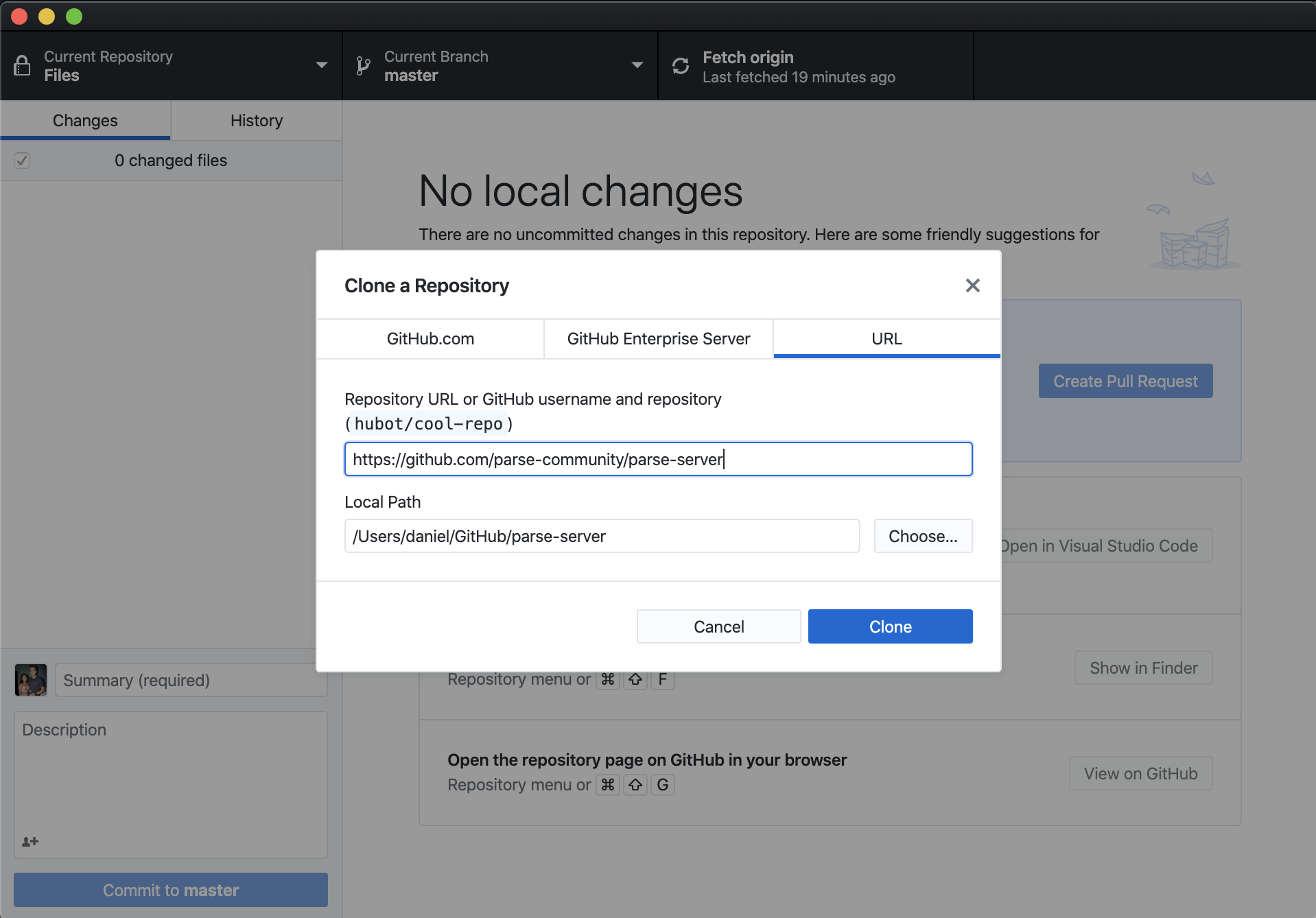 Ok, great! Now we have a local copy of Parse Server.

In order to add code to Parse Server, we need to create a “Branch”. This allows git to track any differences from our “Branch” vs the “master” branch, so we can hopefully merge our changes with the main project in the future.

First, set current repository to the clone of Parse Server, and then press the branch. 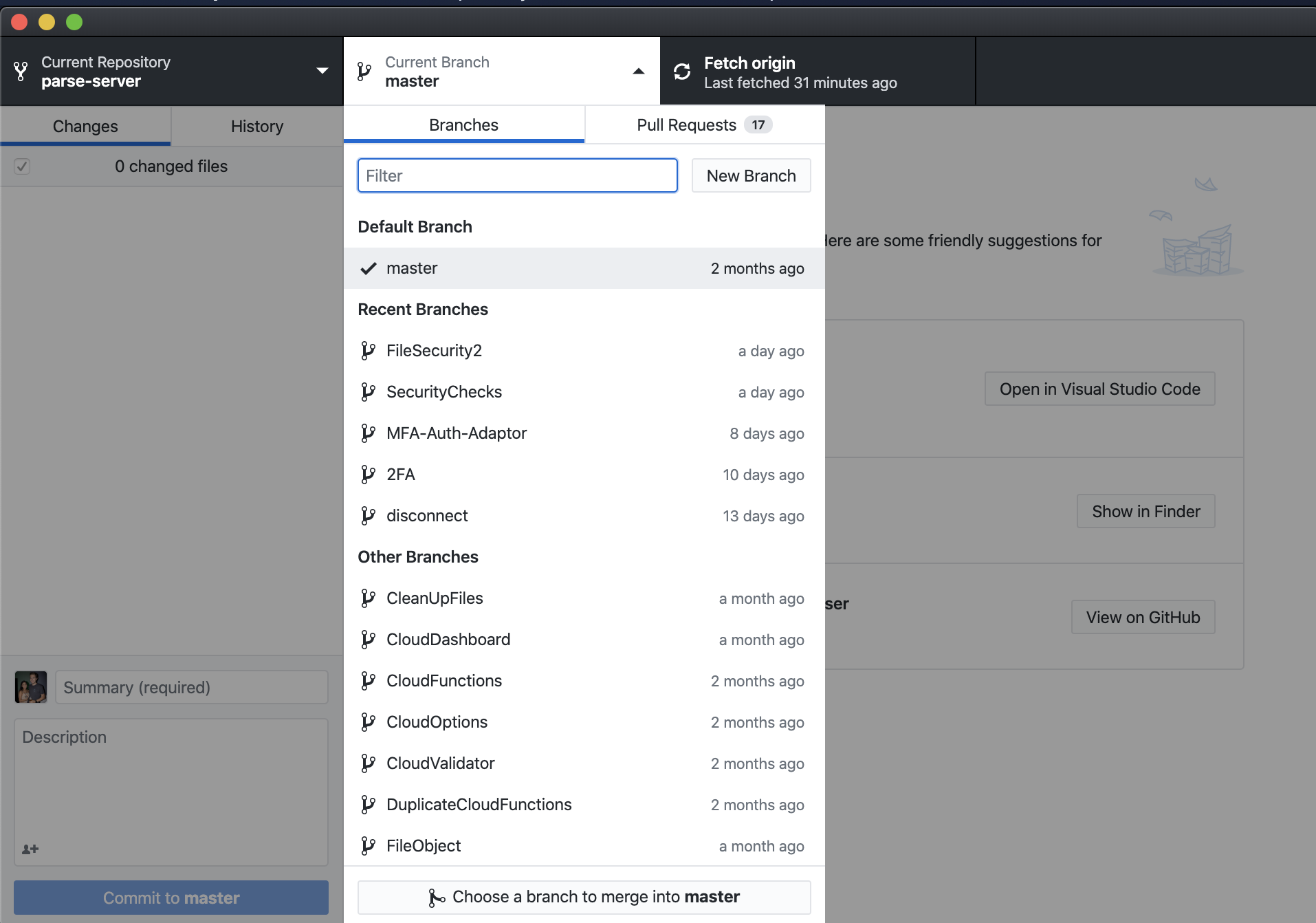 Next, select “New Branch. Name your branch appropriately according to the feature you are working on. 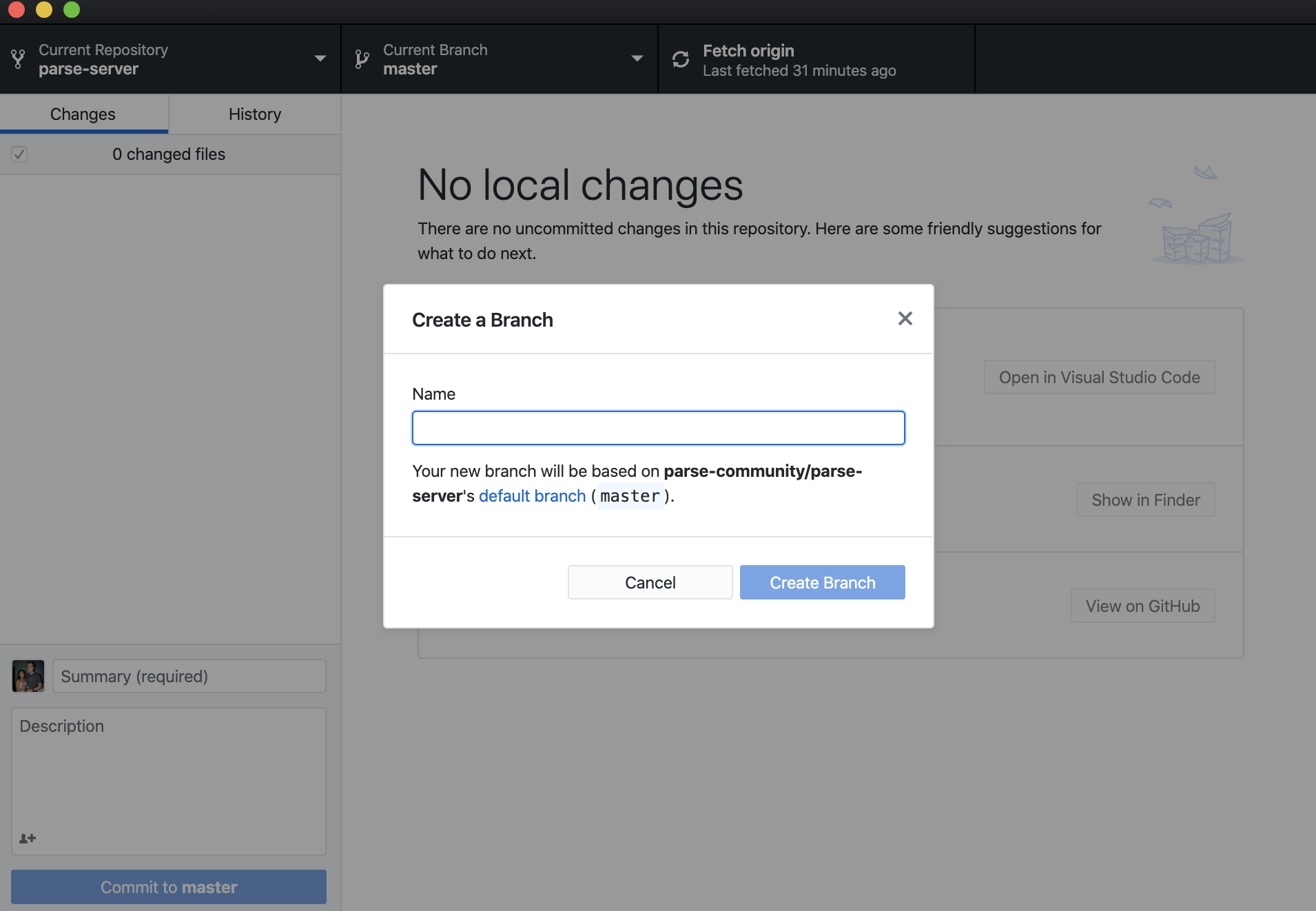 For this blog post, I am working on adding request.context to an afterFind trigger, so I will name this branch afterFind-context.

Ok, now for the fun part! Next, select “Open the repository in your external editor”. I am using Visual Studio Code.

You will notice there are a lot of files here. Don’t be alarmed, we try to keep things as intuitive and organized as possible.

Let’s open a new terminal and run npm run watch so that changes to the src folder take effect. 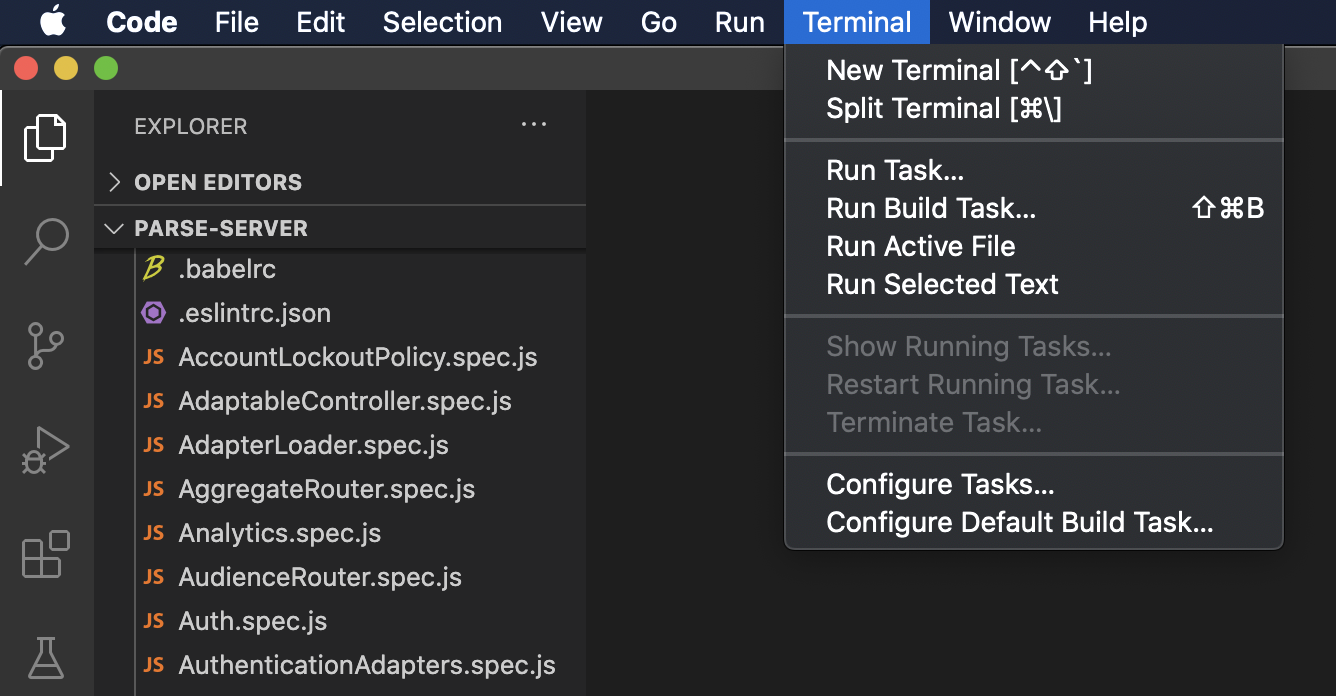 The first thing I like to do for an issue like this, is write a failing test case so I can be clear as to what I am fixing.

If you’re not familiar with test cases, they are essentially javascript files that automatically test and ensure that logic prevails. Parse Server uses Jasmine tests to ensure that new features do not affect existing functionality.

You will find all the Parse Server testing under /spec.

The issue I am fixing is related to Cloud Code, so the spec file I am adding to is CloudCode.spec.js. 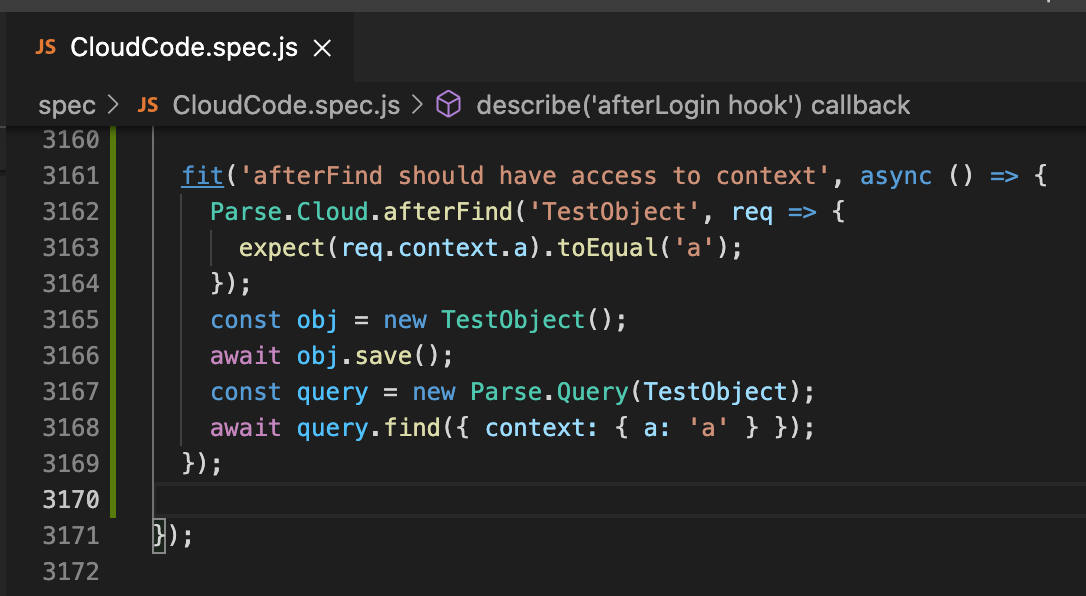 Here I have added my new test. You will notice that the code here is the same as you’d use in Parse Cloud code, with a few small changes.

To run this test, click Terminal > Split Terminal and in the new terminal window, type npm test spec/CloudCode.spec.js. This might take a moment.

Here are the results:

As expected, the test failed with “Error: Cannot read property ‘a’ of undefined”. This confirms that this is indeed a bug, or a feature that is yet to be extended. So let’s get to work!

It can be daunting at first to work out where the changes need to be made. The Parse Core team and other contributors are always happy to give tips and pointers and would rather your time not go wasted, so always feel free to ask in the community forum. The notable files is also a good resource too. It’s unrealistic for us to expect anyone new to be fully across the code base, so there is no shame in asking for pointers.

The file I am working on to start is Triggers.js. Here’s the process I went to find that: 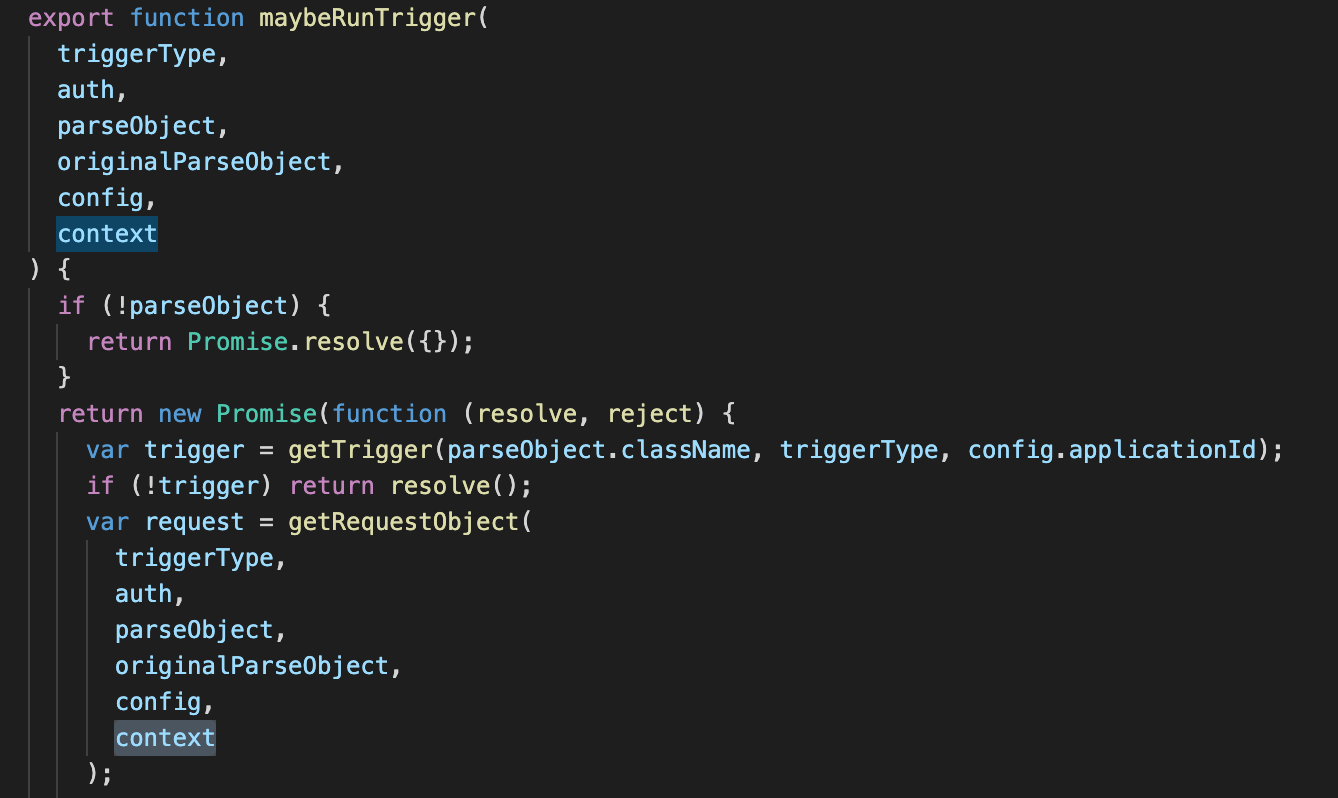 So, let’s add context in, as it is in the other functions:

We also need to add the afterFind type to triggers with context:

Cool! However, when I searched maybeRunAfterFindTrigger, I noticed that no context element was passed from RestQuery. So we’ll add that: 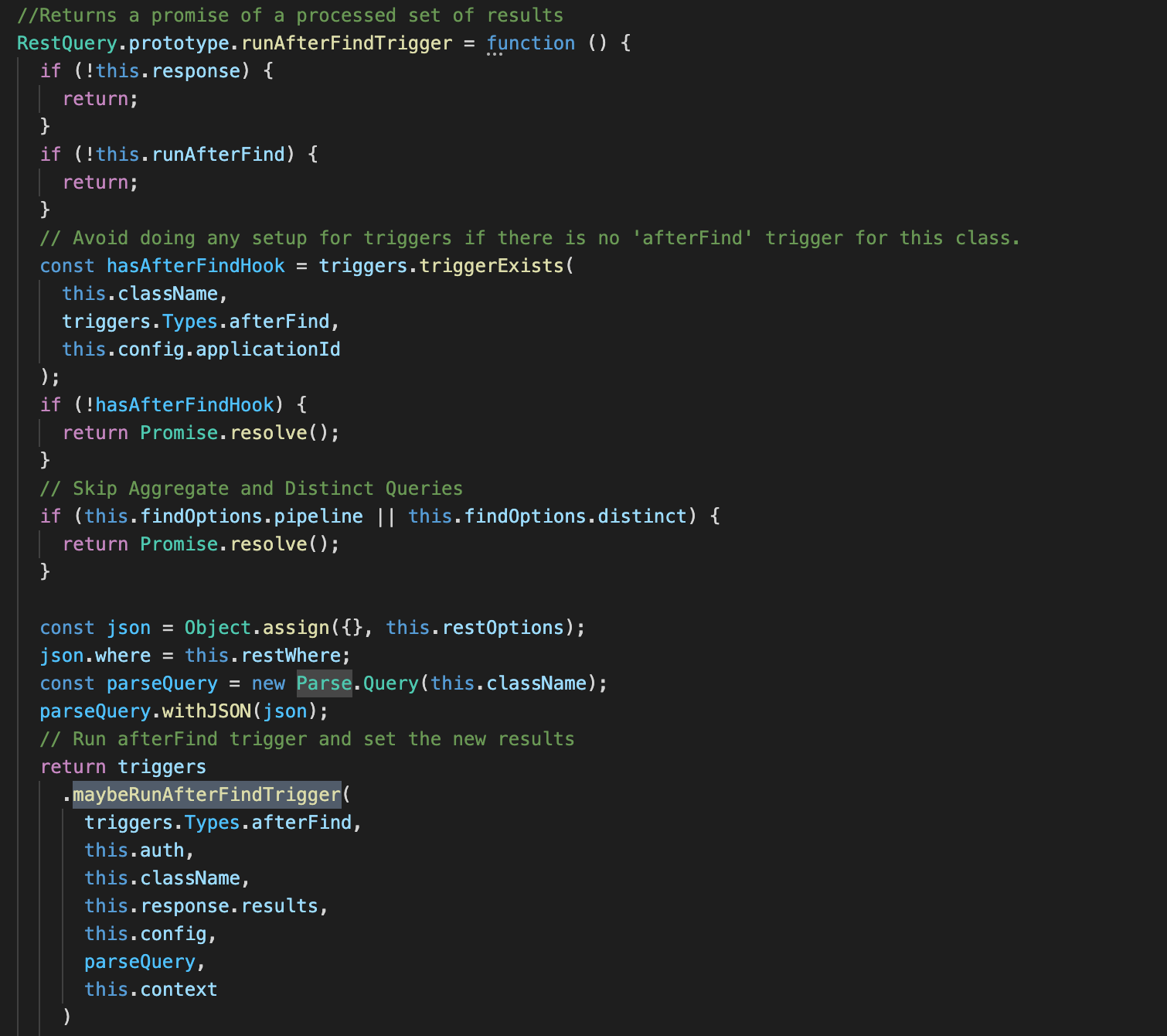 Next, context is never passed to RestQuery.js, so it won’t know what this.context is. Let’s add that too, with a similar pattern to RestWrite.js: 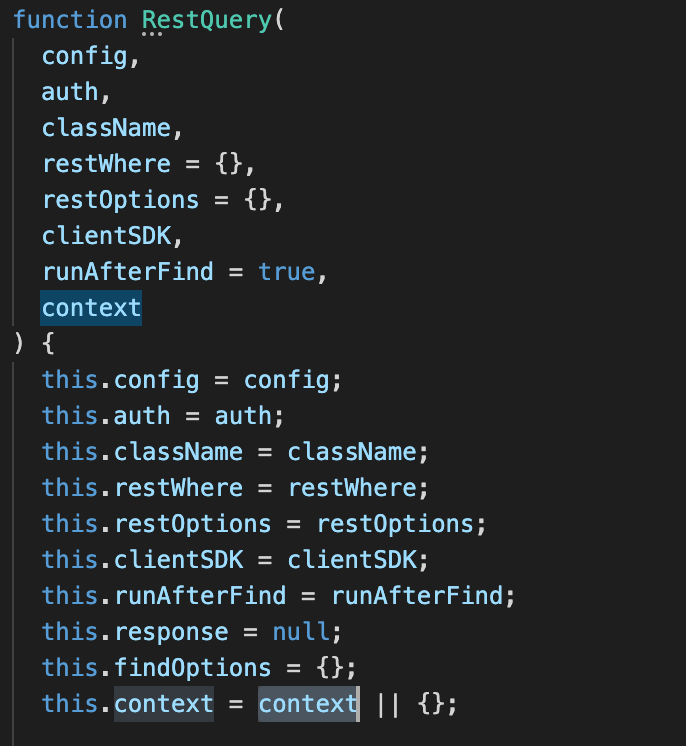 Ok great. Now we’ve got to pass the final context parameter to RestQuery.js, and then we should be good to run our test again. The context argument needs to be added to new RestQuery(... in rest.js

I’m pretty sure I’ve added context everywhere it’s needed. I can always come back and continue editing the files, or temporarily add console.log in a few places to work out what’s going on.

Awesome, this means that the test passed and request.context is now available in afterFind triggers!

In order to merge with the master repo, let’s check a few things:

So, we’re all good to go! Let’s jump back into GitHub desktop. 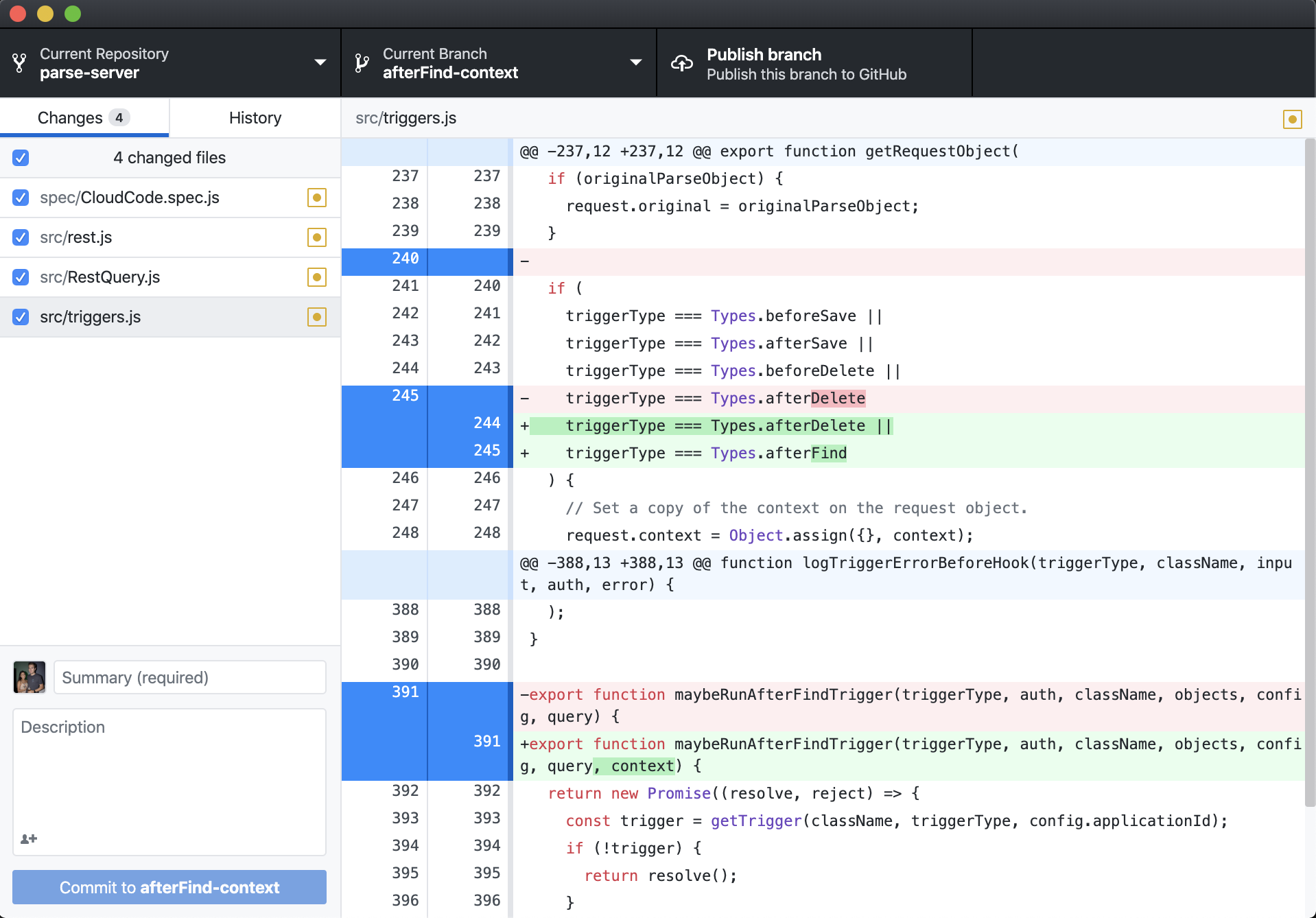 Here you can review all the changes you’ve made compared to the master branch. In order to upload these changes, type in a summary, and press Commit.

The summary of the first commit is what will show under GitHub file structures, so I try to give a little explanation here.

Now, your branch is available on GitHub. You can install this fork and test it on your own Parse Server using npm install github:myUsername/parse-server#my-awesome-feature.

All you have to do from here, is fill out the form, and hit Create Pull Request. The core Parse Team will review your changes, provide feedback, and eventually merge the changes with the master.

You can see my PR for this feature here.

And that’s all! You’re on the way to becoming a Parse Contributor!

Remember, if you’re willing to contribute to our amazing project, the Core Team and many other contributors (such as myself 🤩) will be more than happy to help you learn. We are after all, a community.